The succession was primarily between Brigham Young and Sidney Rigdon.

An image below of what blood atonement is/was not, though such depictions were common misrepresentations: 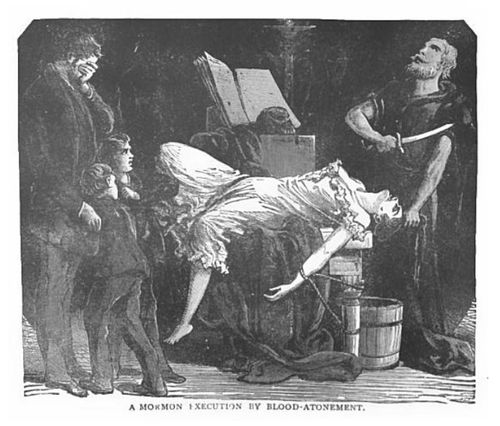 Brigham Young taught this principle in the early days in Utah.  Brigham was overzealous in some of his preaching, and this appears to be one of those areas.  However, don’t forget this concept was never carried out.  Not once.

But even Brigham provided two caveats to this idea:  1)  this practice would only occur in a pure theocracy, similar to what was practiced in the Old Testament, and 2) the murderer or sinner would have to volunteer for the punishment.

Even the Old Testament contains laws on the books that were never enforced. 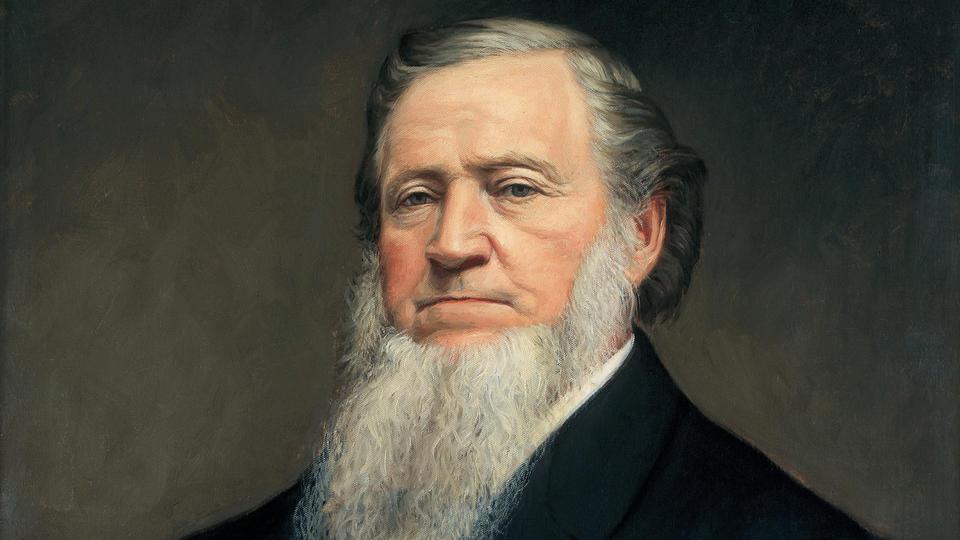 Future leaders repudiated blood atonement ideas that were making bad publicity for the LDS Church around the time Utah as hoping to be added to the Union.

Jeff and Latter-day Saints Q and A shares this:

In Mormonism, blood atonement is a controversial doctrine that taught that some crimes are so heinous that the atonement of Jesus does not apply. Instead, to atone for these sins the perpetrators should be killed in a way that would allow their blood to be shed upon the ground as a sacrificial offering.

The doctrine is no longer accepted by The Church of Jesus Christ of Latter-day Saints (LDS Church),[1] but it was significantly promoted during the Mormon Reformation, when Brigham Young governed the Utah Territory as a near-theocracy. Sins that Young and other members of his First Presidency mentioned as meriting blood atonement included miscegenation, apostasy, theft, murder, fornication, and adultery.

Young taught that the doctrine was to be a voluntary choice by the sinner, and only to be practiced under a complete theocracy (which has not existed in modern times)[1]. Young considered it more charitable to sacrifice a life than to see them endure eternal torment in the afterlife. In a full Mormon theocracy, the practice would be implemented by the state as a penal measure.

The practice of “blood atonement” was formally denied and repudiated by the church in a statement issued in 1889:

MANIFESTO OF THE PRESIDENCY AND APOSTLES “SALT LAKE CITY, Dec. 12th, 1889. To Whom It May Concern: In consequence of gross misrepresentations of the doctrines, aims and practices of the Church of Jesus Christ of Latter-day Saints, commonly called the ‘Mormon’ church, which have been promulgated for years, and have recently been revived for political purposes and to prevent all aliens, otherwise qualified, who are members of the ‘Mormon’ church from acquiring citizenship, we deem it proper on behalf of said church to publicly deny these calumnies and enter our protest against them.

We solemnly make the following declarations, viz.: That this church views the shedding of human blood with the utmost abhorrence. That we regard the killing of a human being, except in conformity with the civil law, as a capital crime, which should be punished by shedding the blood of the criminal after a public trial before a legally constituted court of the land. We denounce as entirely untrue the allegation which has been made, that our church favors or believes in the killing of persons who leave the church or apostatize from its doctrines. We would view a punishment of this character for such an act with the utmost horror; it is abhorrent to us and is in direct opposition to the fundamental principles of our creed.

The revelations of God to this church make death the penalty of capital crime, and require that offenders against life and property shall be delivered up and tried by the laws of the land.’’ We declare that no bishop’s or other court in this church claims or exercises civil or judicial functions, or the right to supersede, annul or modify a judgment of any civil court. Such courts, while established to regulate Christian conduct, are purely ecclesiastical, and their punitive powers go no further than the suspension or excommunication of members from church fellowship. 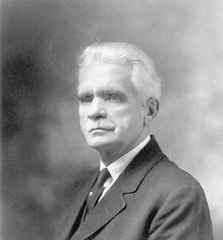 “The doctrine of “blood atonement,” then, is based upon the scriptural laws considered in the foregoing paragraphs. The only point at which complaint may be justly laid in the teaching of the “Reformation” period is in the unfortunate implication that the Church of the Latter-day Saints, or individuals in that church, may execute this law of retribution.

Fortunately, however, the suggestions seemingly made in the overzealous words of some of these leading elders (seems like Roberts is hinting at Brigham Young here) were never acted upon. The church never incorporated them into her polity. Indeed, it would have been a violation of divine instruction given in the New Dispensation had the church attempted to establish such procedure.

As early as 1831 the law of the Lord was given to the church as follows: “And now, behold, I speak unto the church: Thou shalt not kill; and he that kills shall not have forgiveness in this world, nor in the world to come.”[59]

Dennis Prager talks about capital punishment for premeditated murder in this video below.  Additionally, he enlightens on other Jewish laws that helped introduce much more humane legal practices.

“First, Russell Stevenson interviews Gerrit Dirkmaat about the research he and LaJean Carruth did comparing the shorthand notes of George Watt to some of the speeches in the Journal of Discourses.

The Journal of Discourses have historical and religious value, but Dirkmaat urges members to be careful quoting specific passages and to realize that in most cases, there is no way to know the specific words used. 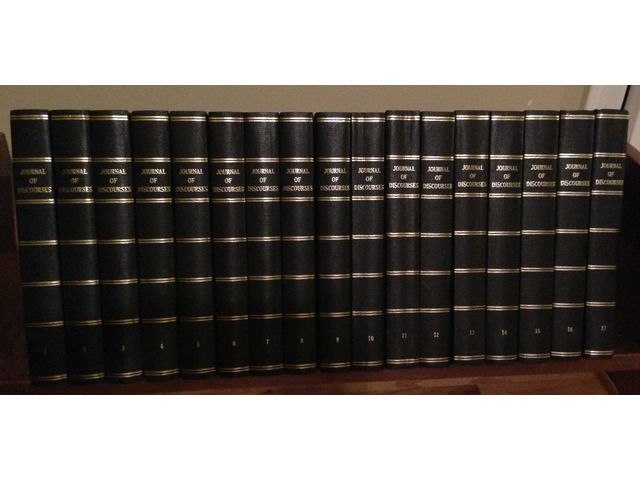 LaJean Purcell Carruth has an unusual skill: she can read the shorthand of George Watt, the transcriber of the speeches contained in the Journal of Discourses, his private printing venture.

Over the past thirty years, she has learned his distinctive style–the unique upturns and curves he made in his notations. As she transcribed his notes, she noticed that they varied — sometimes greatly — from the printed versions of the same speeches. She wrote a poem about what she noticed:

There was a man named George Watt,

Who could improve Brigham Young, so he thought.

So he took out words here,

And he added words there,

And his accuracy was not what it ought.

LaJean expounds on what she has learned about the speaking styles of early religious leaders. They spoke extemporaneously and without notes and were more prone to engage in speculative theology than current leaders.

In her research, she discovered that the “one drop [of Negro blood]” phrase attributed to Brigham Young by Wilford Woodruff did not exist in the original shorthand transcription of George Watt on a speech relating to the priesthood and temple ban.”

Watt took good notes.  The issues are found during the review process.  What was published wasn’t identical to what Watt wrote down.

This video discusses the horrors of the Mountain Meadows Massacre, what led up to it, if Brigham Young ordered the massacre, the aftermath and some lessons we can take from this stunning and horrific event.

The Mountain Meadows Massacre took place just a year after the Handcart Rescue. Richard Turley and Emily Utt discuss both events and consider what factors can lead us toward tragedy or heroism.

Barbara Jones shares her insight with Gospel Tangents on this horrible tragedy:

Geneticist Ugo Perego shares his research as part of understanding this tragedy (near the end).

Ugo first talks about DNA and Joseph Smith’s polygamy, followed by DNA and the Book of Mormon.

Click below to hear Ugo on LDS Perspectives Podcast:

Wonderful podcast about an awful part of our history:

The Mountain Meadows Massacre (MMM) used to be a top 3 for LDS critics.  However, because of exhaustive research this topic no longer occupies such a position.

In the recent past the LDS Church utilized massive resources to look at every journal & every possible connection to the MMM. The results were published by Oxford University Press. Nothing to hide.

Most critics don’t ever publish their jumble of claims in journals.  Instead, they repeat what they have heard, which isn’t always based on confirmed research. The most significant critical claims: blood atonement & God told Brigham to do it.

If critics are honest they’ll see Latter-day Saints were reacting to many factors at the time.  Of course, the Saints were not justified to murder.   Anyone.  And Brigham Young  didn’t hatch the plot.  He tried to stop it.

Side note: Joseph’s supposed polyandry will likewise soon fall out of everyone’s top 3.  It’ll take more time and understanding of the research done by Brian Hales.

The above video is only 28 minutes long.  Continue to the end of Bro. Turley’s speech by watching #3 and #4 below:

Another video on this topic — by LDS geneticist, Ugo Perego — that discusses genetics that were long debated. Now, they’re understood and that understanding make the picture clearer.