Brant Gardner discusses the Father God, El; the mother God or spouse of El, Asherah; Jehovah, the preeminent among the Sons of El; and other topics in the development of gods in Judaism.
The Sons of God were assigned to different nations.  Jehovah was assigned to Israel.  By the 8th and 7th centuries BC Jehovah grew in stature, supplanting El in certain respects, as the Jews developed a proto-monotheism.

A FARMS review from 2004:   The Deuteronomist De-Christianizing of the Old
Testament.

From a FARM’s review:  Of Simplicity, Oversimplification, and Monotheism.  Barry Brickmore explains LDS concepts about the Godhead that are misrepresented by evangelical author Owens in his book, “New Mormon Challenge.”

Please read or listen to Stephen Smooth on this topic:  The Divine Council in the Hebrew Bible and the Book of Mormon. 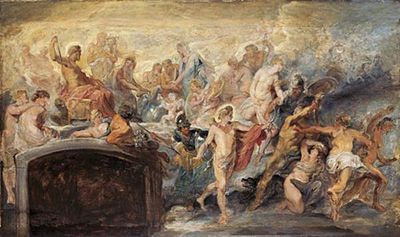 Non-Mormon,  Dr.  Mattei writes about El (Father) being worshipped before Yahweh in this post #27:   Are Yahweh and El the same god OR different gods?

“The term divine council is used by Hebrew and Semitics scholars to refer to the heavenly host, the pantheon of divine beings who administer the affairs of the cosmos. All ancient Mediterranean cultures had some conception of a divine council. The divine council of Israelite religion, known primarily through the psalms, was distinct in important ways.”

David Bokovoy, an LDS expert on divine councils, engaged with Michael Heiser on this topic.  Heiser wrote a critique of Mormonism’s use of Psalm 82.  Then David explained our position.  Heiser finished the dialogue.  Very awesome to have this type of dialogue.

These 3 Mormon guys are fun,  and also bring solid content.

Mark Smith is a foremost scholar in this area of Judaism’s early polytheism and eventual monotheism.  Concepts of multiplicity of Gods in a council structure is recognized by all Biblical scholars today.

El was present in the early tradition and texts as a separate most-high God.    Later,  however, as the Jews returned from the exile and the OT was canonized, Jehovah appears to assume the characteristics of El.  That is, Judaism thus became monotheistic.

Smith explains — in his book “Jehovah and the Other Deities in Ancient Israel” — that in early Jewish history, Jehovah was Israel’s God fully distinct from El (the Father).  In Deuteronomy 32 : 8-9 Jehovah was cast as one of the sons of El.  Each diety received its own nation in Deuteronomy 32.  Yahweh was given Israel.

Michael Ash explains the role the Deutoronomists played in reforming Judaism into something more monotheistic.  Additionally, prior to the Babylonian Captivity, Asherah (a Heavenly Mother figure) had been worshipped in the Temple for centuries.

Nephi’s vision of the Tree of Life includes a reference to the virgin Mary, the mother of the Son of God.  The Tree of Life in 1 Nephi dovetails with Mark E. Smith’s teachings about Asherah.

You may also want to review the slides (and watch below video) used by Robert Vukich in his debate:  Rejecting the False Doctrine of the Trinity.

Robert discusses the scriptural basis for more gods than Jehovah.  He also shows that God the Father (El) is completely separate from the Son, Jehovah.