From the fun-loving, light-hearted 3 Mormons:

Jeff at Latter-day Saints Q & A shares his insights:

I’ll take a moment to debunk common comparisons with Bigfoot.

Critics frequently compare LDS witnesses to those who claim to see the virgin Mary (or Bigfoot or still others).  Similar?  Not more than superficially.

Do 3 or even 8 people see Mary or Bigfoot simultaneously?  Hear Mary’s voice together?  Videotape Bigfoot in daylight hours? See a table full of Catholic relics, shown to the 3 one by one? Then hear God command them to testify?

No.  From my experience, Bigfoot and Mary witnesses are similar: no lasting evidence.  And testimonies almost always wilt under cross-examination or sustained questioning. 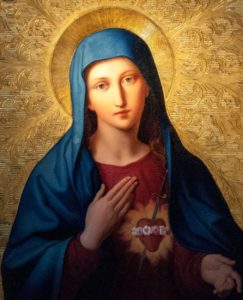 These elements are what provide such strong support for the Book of Mormon witnesses, the 3 and the 8.  Ditto for the testimony of 8 witnesses. 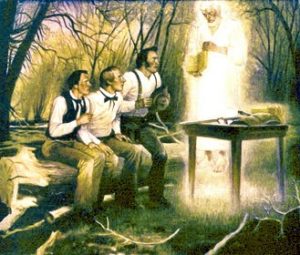 Testimony of the 3 Witnesses

Be it known unto all nations, kindreds, tongues, and people, unto whom this work shall come: That we, through the grace of God the Father, and our Lord Jesus Christ, have seen the plates which contain this record, which is a record of the people of Nephi, and also of the Lamanites, their brethren, and also of the people of Jared, who came from the tower of which hath been spoken. And we also know that they have been translated by the gift and power of God, for his voice hath declared it unto us; wherefore we know of a surety that the work is true. And we also testify that we have seen the engravings which are upon the plates; and they have been shown unto us by the power of God, and not of man. And we declare with words of soberness, that an angel of God came down from heaven, and he brought and laid before our eyes, that we beheld and saw the plates, and the engravings thereon; and we know that it is by the grace of God the Father, and our Lord Jesus Christ, that we beheld and bear record that these things are true. And it is marvelous in our eyes. Nevertheless, the voice of the Lord commanded us that we should bear record of it; wherefore, to be obedient unto the commandments of God, we bear testimony of these things. And we know that if we are faithful in Christ, we shall rid our garments of the blood of all men, and be found spotless before the judgment-seat of Christ, and shall dwell with him eternally in the heavens. And the honor be to the Father, and to the Son, and to the Holy Ghost, which is one God. Amen. 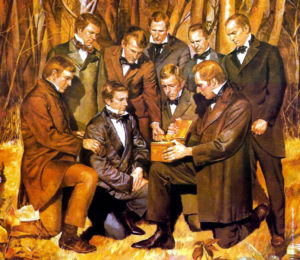 Testimony of the 8 Witnesses

Be it known unto all nations, kindreds, tongues, and people, unto whom this work shall come: That Joseph Smith, Jun., the translator of this work, has shown unto us the plates of which hath been spoken, which have the appearance of gold; and as many of the leaves as the said Smith has translated we did handle with our hands; and we also saw the engravings thereon, all of which has the appearance of ancient work, and of curious workmanship. And this we bear record with words of soberness, that the said Smith has shown unto us, for we have seen and hefted, and know of a surety that the said Smith has got the plates of which we have spoken. And we give our names unto the world, to witness unto the world that which we have seen. And we lie not, God bearing witness of it.

Brett McDonald at LDS Truth Claims YouTube channel created these videos relative to the witnesses.  Brett has done his homework.

Brian Hales debunks the anti-Mormon claims against the Book of Mormon witnesses.

Did the witnesses leave the church?  Yes.  Deny their testimony?  No.